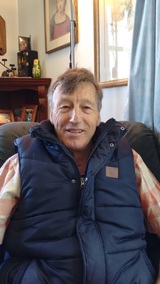 I am currently retraining as a paramedic but continue to tutor at Taruna, the NZ Waldorf Teacher Training where I was a founding tutor in 1983.